Long-toed salamanders are one of the most common salamander species throughout the Pacific Northwest and are found in a diverse array of habitats ranging from arid systems in eastern Oregon and Idaho to the temperate rain forests of coastal British Columbia and Alaska. In Alberta, long-toed salamanders occur only along the Rocky Mountains and foothills and occupy both alpine and valley-bottom systems. The life history of long-toed salamanders is similar throughout its range, but the timing, or phenology, of breeding and overwintering activities can vary. Generally, breeding adult long-toed salamanders emerge from below-ground overwintering sites in the spring to make overland nighttime migrations en masse to an aquatic breeding site. Like many amphibians, long-toed salamanders are “pond-breeding”, which means they require a permanent to semi-permanent standing body of water in which to lay eggs, and for larvae to develop and metamorphose into terrestrial juveniles. After breeding and egg-laying activities have concluded, adults will migrate back into the terrestrial areas around their breeding site and remain there for the remainder of the warm months until cold winter temperatures drive them below ground, back to their overwintering sites. Larvae metamorphose into terrestrial juveniles later in the year and emerge from the water body to find their own foraging grounds and overwintering refuges.

I worked with long-toed salamanders in Waterton Lakes National Park in 2013 and 2014, focusing my research activities on the breeding population inhabiting Linnet Lake. This population had been studied by grad students two other times, beginning in 1993, and has experienced over a 60% population decline since then. The decline is thought be caused by high road mortality and predation of aquatic larvae by fish in Linnet Lake. The installation of under-road tunnels in 2008, and fish removals in 2010 and 2011 were done with the hope of reversing the population decline, and one of the main goals of my research was to find out if these two mitigation actions had any measureable effect. Other goals of my research were to determine how well wildlife cameras worked for monitoring tunnel use by salamanders, find out what sorts of refuges salamanders use to overwinter, and investigate the orientation of migrating adults and dispersing juveniles with respect to the breeding site shoreline. I used a unique method of tracking in my investigations, termed “PIT telemetry”, which is simply using a large portable radio frequency identification (RFID) antenna to relocate passive integrated transponder (PIT)-tagged salamanders in the field. I also used PIT tags to create mark-recapture population estimates as well as detect movement of tagged salamanders through some of the tunnels.

Essentially, I found: no evidence that the long-toed salamander population at Linnet Lake is recovering, and, in fact, the population may still be in decline; long-toed salamanders overwintered exclusively in rotten tree roots (n = 10), sometimes associated with a decaying tree stump; on average, cameras capture about 15% of salamanders passing through tunnels; and adult and juvenile salamanders orient non-randomly (and differently) during movements to and from breeding locations, which has implications for protecting terrestrial areas around breeding sites.

Salamanders are pretty cool critters! I would encourage any nature-lover to take a moment next time you’re in the Rocky’s to gently flip a log or two near a fishless wetland in the spring and see if you can spot one of these elusive amphibians. The results of my research are available in the form of a MSc. thesis through the University of Alberta libraries, and I can be reached by email at mratkins@ualberta.ca. 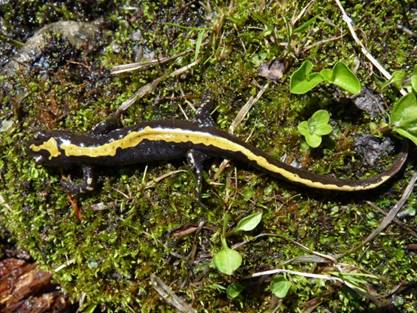